For those who know Anthony Hitchens and his family, this has been an amazing weekend of love, family, and reflection.  As Anthony prepared to play on the biggest stage in sports, Super Bowl LIV, there was pure excitement in the Clearview family.  Teachers, administrators, support staff, students, coaches, and community came together to show extreme love and pride for one of our own.  From painting the pride rock, to Anthony Hitchens (Chiefs) dress-up days, to yard signs, to decorated donuts, the Clearview District demonstrated a special bond.  Regardless of adversity, differences or tough times, the blue and gold that runs through all of our veins provides us all with the innate ability to stay a tight-knit family and root for success for each other. 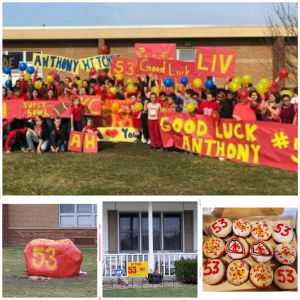 Anthony Hitchens and the Anderson family have been a shining example of who we strive to be as a community.  Brad and Amy Anderson demonstrated heart, toughness, and passion in raising four great young men.  Zach Anderson, James Washington, Anthony Hitchens, and Chad Anderson were all standout student athletes for Clearview.  For those who don’t know, Brad and Amy opened their home to James and Anthony and the four brothers became family.  Through the toughest of times, especially when Brad was diagnosed with nonalcoholic cirrhosis, the family always pulled together.  Even through dark days, they continued to lean on each other and support one another in order to thrive.  When Brad received a liver transplant from his cousin, Rhonda, the family was given a gift of time.  Through the years, the Anderson family was able to spend that time together and create precious memories with a man who fought and fought to continue to be there for his family.  In December, Brad passed away and the family continues to teach us all a valuable lesson in battling through adversity, staying together, and cherishing relationships with family and extended family. 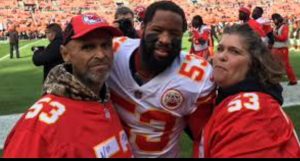 The attributes that come to mind when people describe Anthony are hard-working, humble, caring, selfless, leadership, and toughness.  Anthony worked hard throughout his years at Durling and Clearview to become a better student and athlete.  He worked hard to improve his academics throughout his time as a Clipper.  He had success in athletics in large part because of his work ethic, but also because he was a great teammate.  And although he was not heavily recruited by the big colleges (touted as a 2-star athlete), Iowa brought him in and soon realized how big Anthony’s heart was.  His drive to be great never stopped and he found more and more success as a Hawkeye.  Upon graduation, Anthony was drafted by the Dallas Cowboys in the fourth round.  After four years in the NFL,  the Kansas City Chiefs jumped on the chance to sign Anthony and embraced his leadership.

As a defensive captain, Anthony led the Kansas City into Super Bowl LIV and made a huge difference in the biggest game of the year by being physical and controlling the point of attack.  The offense was able to get things rolling in the fourth quarter and turned things around.  At the end of the night, the Chiefs would embrace each other and the Lombardi Trophy while showing the world who the true champions were.  Anthony would again come out on top through his leadership and ability to embrace true team and family. 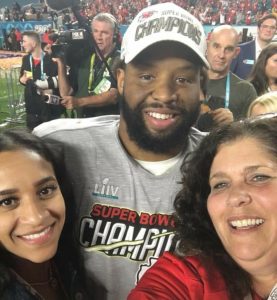 It is a story for the ages, one that could only be imagined for a book or a movie.  But this has become reality due to hard work, love, and an undying drive to reach for your dreams.  We are all better for knowing Anthony and his family.  May we all continue to build the relationships that make Clearview special and keep chasing our dreams.  Congratulations Anthony!!!  You are a true Champion and you have made Clearview and the city of Lorain proud!