Clearview’s DeAri Todd announced via Twitter on Sunday that he had decommitted from Boston College and has given a verbal commitment to Michigan State.

Todd, a special mention All-Ohio player on the defensive line, received an offer Friday night from Michigan State.  He also had traveled to The University of Cincinnati on an official visit over the weekend, before choosing the Spartans. 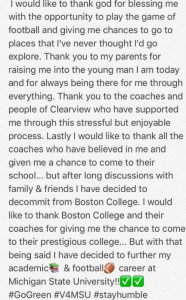 Check out coverage as well in the local media: